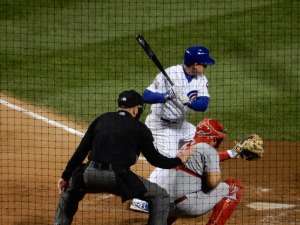 We trained it out with the locals to Wrigley Field (yes, after the man who made a fortune from chewing gum), to the home of the Chicago Cubs for our first ever ball game.  For a Tuesday night they had a huge crowd.  What we have managed to learn is that the ball teams play 3 games against the same team, over the space of 3 nights.  In this case we went along to the 3rd night and watched the Cubs defeat the Cincinnati Reds 7 – 0 and we saw a ball smashed for a home run as well.  It was the only one all night.   All of the players have remarkable ball catching skills.  Alas, the ball-hitting skills are not so good.  In fact at one part Geoff declared that cricket (and test cricket at that) was possibly a faster paced game with a significantly higher scoring rate.  Anyway  the Reds pitcher was definitely off his game and eventually they subbed him off and found another replacement,

We bought hot dogs, but could not come at a bucket of coke each, so I managed to find some red wine and we cheered and clapped the Cubs home to a victory.  Especially after all of the locals had gone to great lengths to explain that the Cubs are a terrible team and always spend most of their time at the bottom of the ladder.

It would appear that the Main Umpire revels in his authority and nothing happens unless he says so.  He even has control over the music they play during the innings breaks.