The morning heralded the first strategic decision in a fortnight. Do I turn west and head to the Eyre Peninsula (the original plan) or veer south towards Adelaide?The rain fronts were awesome and I knew for sure I was going to get wet either way. In the end I decided that I wanted to get out of the arid areas and see some greenery. So I abandoned the only plan I had and headed south.

For once I kept to a daily schedule and was aboard a fully fuelled and packed Desmo-dromedary by 8 am in a balmy 18 degree C start up. The 214 km run to Port Wakefield was fast, no one sat on the speed limit despite the protestations of road side signage. two hours and 15 minutes after setting off I had refuelled and grabbed a coffee. A troupe of 8 riders were heading off to Roxby Downs and we swapped mining tragics before their leader rounded them up and I headed south. The temperature kept dropping as the day wore on and when it got to 15 degrees C I flipped on the heated grips. Around this time I drifted into Adelaide traffic just as the clouds cleared and the sun came out. I pulled over and set my iPhone as a satnav, sitting on the Ram Mount. I didn’t worry about the audio guide because I thought there were only a few turns. Sure enough I cleared Adelaide in about 1.5 hours with the only frustration being a lot of traffic lights and lane changes around trucks. 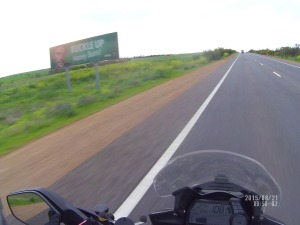 extreme instead of severe. They were certainly a challenge and surprisingly local. Sometimes hitting me amidships but often just on the helmet or on the front/ rear tyres. The clouds were low but racing East, I turned to follow, daring them to drop one last downpour on me. The plan, if there was one, was to cross Murray Bridge then turn on to the coastal Coorong.

Somehow I missed all the turnoffs and eventually stopped in the metropolis of Coomandook. 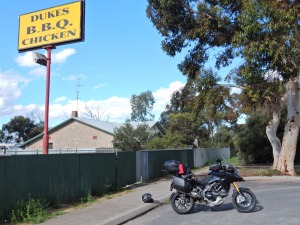 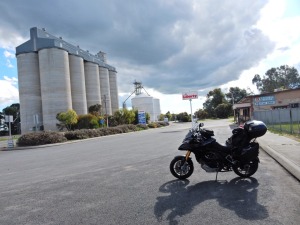 A Yamie 1300 rider from Perth dropped in to show off his $7,000 bargain buy he was riding home from Ballarat and I mused over why someone else always gets the bargain. Then I made a big mistake ….the temperature touched 30 degrees and I started peeling off thinking I had out dared the weather….I hadn’t.

Back on the road I drifted into what felt like the WA wheat belt without the wheat. Fields of bright yellow grain crops flashed by bordered by avenues of gnarly river gums.

By the time I hit “Keith” (the town and not the bloke) I had given up on the Coorong road but noted the complete absence of likely accomodation. As 4 pm ticked by I made an ambitious plan for the next two hours ( long term planning is more my forte) to reach Mount Gambier. The weather waited…and monitored my phone call to book accommodation….then threw it all back at me! The temperature plummeted to 15 degrees C but I resisted the delay of stopping to re-layer, rain misted in from phantom clouds, the sun was still casting long shadows and trucks clogged the lanes on both sides of the road. As night fell I could only think I was going to get cold and wet…and I did. 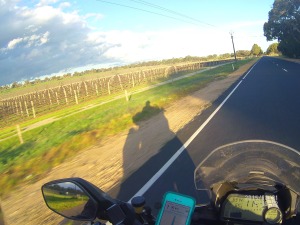 It’s getting late in the vineyards 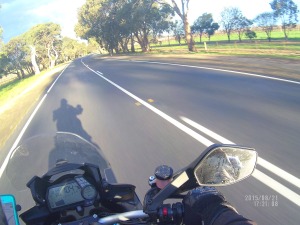 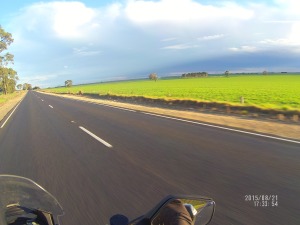 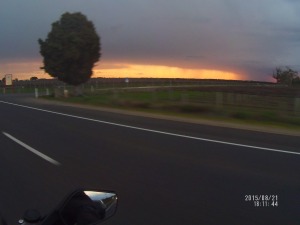 It was 6:15 when I arrived at the Mount Gambier van park where the cabin was booked. I had ridden for 8 hours and 53 minutes for a distance of 783.5 km and I felt like a million dollars. Some days are just like that! Get out there.