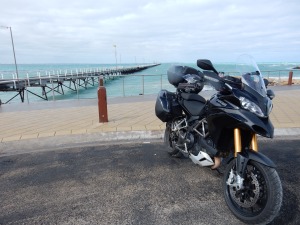 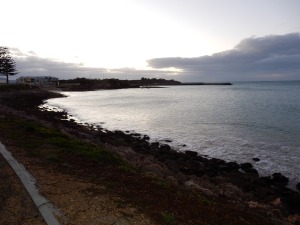 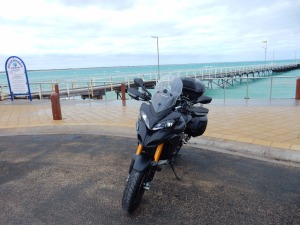 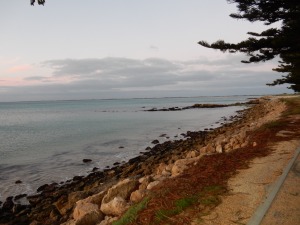 I was checking out of the motel trying to ignore a shiver down my spine.

the forecast was fine but at 9:00am in Mt Gambier the thermometer echoed 9 degrees C. I reached in the pannier  for the 12 volt jacket and rolled out of town toasty warm. The road led me to the coast and pushing west against the Roaring Forties. I had planned a nonchalant meander to Beachport for smoko. This became something akin to a drunken dawdle as the light head wind began to resemble a force 9 gale. I dropped out of the limestone country into the coastal dunes only to be accosted by sandy drifts furrowing the road way. It wasn’t only me suffering, the Drift camera rattled loose on my helmet and I stopped in time to save it. One of my wing mirrors pirouetted wickedly until it was stilled by a leathermans touch up. The windy buffets at head height were anticipated but the front tyre crash tackles by a hundred Wendle Sailors had me hunched over the handle bars until Jarryd Haynes return from the San Francisco 49ers walked the rear wheel sideways.

i was glad to pull up at the car park only to notice the first spits of rain from a cloudless sky? There is always a moment of transition betwixt helmet and landing on earth, so I stood beside the bike letting the water rush over my face. Only to realise the crashing Southern Ocean was trying to get into the car park with me! As each wave broke the arctic howl collected its tithe of briney bubbles to bath the bike. I was merely a piece of collateral damage so I bolted off to find shelter and grab a coffee.

after refuelling I started filling in the log book to realise that the electronics on the Duke showed impacts of the weather. The trip meter read out refused to come on and the keyless starter was difficult to fire up. Finally I headed off into the maelstrom and found a van park at Robe where I could park up and get out of the wind.

The next day dawned blue skies and a light breeze so I headed off to explore the Coorong. These sandy lowlands opened up in places to lush crops and grazing land. I let myself get drawn into the view and my speed dropped to 100 km/hr. A quartet of Queensland BMWs overtook me and shattered the ambience. The beemers were bagged out and as panniers and pillions slipped past I noticed my speedo steady on 120. Obviously their schedule was tighter than mine and soon enough they disappeared like a rocket sled on rails.

i stopped for fuel at Meningie near the mouth Murray and mused over Menindie at the other end. Over a coffee I consulted the collective wisdom of Google and was disappointed to read that although both names were aboriginal, there was no connection. Menindie translates (possibly) to “egg yolks” ( did aboriginals fry eggs? Stop thinking about it) which makes sense given the number of separate lakes. Meningie on the other hand translates to “mud” which also makes sense.

back on the bike life was simpler, just change gears and lean, sometimes at the same time. Brakes were optional. I am not sure if it was the cold weather but by this time the “chain slap” was becoming obvious. Despite my daily inspections and chain lube there was something seriously wrong with the final drive, and a chain tension was not going to fix it. I headed for Mt Barker and as I looped up not the hills I felt the air temperature slide from 15 degrees to 9 centigrade. After checking in to a van park cabin, it was seriously too cold for a tent, I phoned the Ducati shop in Adelaide who offered to sort me out the next day.

i will squeeze an extra day on the page,  I delayed departure from Mt Barker till 9 but the temp was only touching 7… Far out this weather is getting annoying…no way I could handle rain and slippery roads today. After a quick squirt down the mountain and a tractor ride through Adelaide traffic I handed the bike over to Ian at the Ducati dealership.  Straight away he picked it that the chain had tight spots and was in need of replacement. I felt vindicated in bringing the bike in to the doctors! I also checked on my tyres, especially the rear which at 5,850 km already had a disconcerting square profile. Seems like it should be expected for the softer Bridgestone’s on long runs through Central Australia. That was a relief, I thought I had stuffed up the tyre pressures.

complete with a fancy new chain and relieved of $330 I headed off to crash at a mates place for a few days. It’s time to warm up!