It was a 3 day haul from Maitland to Charters Towers, longer if I stayed on the coast. But there is such a thing as “too much of a good thing”.  Even the bike was cracking the sads. After 10,000 km the rear tyre had reprofiled to a shape akin to a truck tyre. Even slow corners had the added excitement of riding “over a lip” ….certainly one way to stay awake.

The run from Maitland to Musselbrook was glorious and I asked myself again why I was leaving. Further on the canola fields of Gilgandra rippled in a wintry sunshine. Bug splatter changed from annoyance to a major drama. After two hours I was peering between the gaps of green smears. 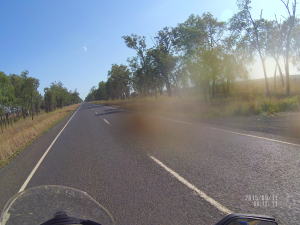 Roadhouses became a more frequent stop as I pulled in, left my helmet on and used the windscreen squeegee in an action to cleaning my teeth. It looked ridiculous standing there with a helmet on, sweeping the soapy foam backwards and forwards in front of my eyes….but it worked, I could see again. I refuelled and pushed on to Moree. Grain trucks, tall B double bins, became constant companions and I followed some while passing others.  The bugs stayed with me

Overnight in Moree then up again to pass over the Barwon River into Queensland. The grain paddocks started disappearing and the country took on the look of cattle properties. Still lots of trees in thick stands, some pasture, mountains to the east. The bike purred.

i didn’t need fuel in Saint George but pulled up to stretch my legs. Ruija, a happy Indian guy working to assist rural Australians suffering depression, pressed me to enjoy a free expresso. We chatted and I congratulated him on his generosity before he wandered off as an incongruous character of the sub-continent, stopping to reassure Ringers and cockies sporting leather weave belts and pocket knives.