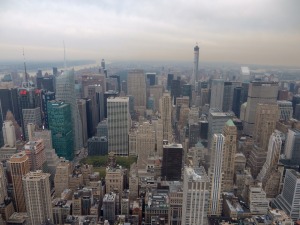 Spent the morning touring New York.  Visited a number of great landmarks including Times Square, Grand Central Station, Chrysler Building, Soho, World Trade Centre Memorial, Wall Street, Central Park, Empire State Building, Meat Packing District, Broadway and 5th Avenue before boarding a ferry for a cruise of the harbour.  I saw New York from the water and cruised under the Brooklyn Bridge and out to Ellis Island and around the Statue of Liberty.

Bit of trivia – New York creates 15,000 tons of garbage each day, all of which is trained or trucked out of the city to land fill sites. New York has 15,000 restaurants.

Back on dry land it was time to secure some tickets from the half price booth in Times Square for a performance on Broadway that evening.  I had been warned that it could take ages to get tickets.  Fortunately it only took minutes to secure tickets to my first preference – Motown the Musical.  After that it was time to  take a stroll in Central Park.

All glammed up for a night on Broadway.  Pat Best (Globus traveling companion) and I took in a show on Broadway as opposed to Off Broadway (theatres with a seating capacity of 100 to 499 seats) or Off, Off Broadway (theatres that have less than 100 seats and use non union actors).  I was thoroughly entertained by the production of Motown – the story of the record label born in Detroit during the 60’s.  The name comes from Motor City…..Motor Town…… Motown.  Stars who made it  thanks to Gordy Berry included Diana Ross and the Supremes, Michael Jackson and the Jackson 5, Marvin Gaye, Smokey Robinson and Stevie Wonder.  The voices, costumes and dancing were incredible.  The audience was up singing and dancing in the isles.  What a night.  A big thank you to Jenny and Bill Vincent for such a great recommendation.